More than reasons to visit Uganda

Uganda is the country where East and West Africa meet, featuring lush forests inhabited by primates and arid savannas which are home to a wide array of plains game. Lakes, mountains, tea plantations and waterfalls are some of the landmarks that made an impression on Winston Churchill when he travelled here, leading him to refer to it as “The Pearl of Africa”.

This article first appeared on Explorer.co.uk by Daniela Pontis

I visited Uganda more than a century after Churchill and I was pleased to see that it has maintained the same beauty and ‘wow’ factor. As Africa Product Manager, I have travelled extensively through my favorite continent and I will never be tired to repeat that every single country provides a different experience; however there is no doubt Uganda occupies a very special place in my ranking!

Unsurprisingly the feedback of those who have had the privilege to visit this country seems to be consistent. There is something magical about it, a fantastic vibe created by a mix of elements that combined have the power to metaphorically blow every traveller away.

If the fact that Lonely Planet chose it as the best destination to travel to in 2012 hasn’t convinced you to visit, then hopefully my highlights will!

Every traveller knows how the attitude of local people can influence the experience when visiting a new country. When going somewhere new, we want to learn about other ways of living, we want contact with new cultures, we want to connect with people whose lives are so different but somehow so similar to ours.

People in Uganda are friendly, open and curious with a great sense of fun. They were happy to see us travelling in their country and they would wave, smile and call us “Muzungu” (white men) not in a derogatory way, but in a friendly, welcoming and to be fair, amusing way.

I remember chatting to a child wearing his impeccable school uniform after a day at school and a long walk back to Bwindi, his village. He told me he was very lucky to live there and proud that people from all around the world visit his home town to see the gorillas. He told me about a few times when he saw the gorillas coming to the village and that they ought to be the most amazing creatures on earth. I was touched and thought it is great to hear that the new generations have understood how important conservation is and how proud they should be to live in such an incredible area.

If you think that everything south of the Sahara is arid, yellow and inhospitable, you are definitely trapped in a cliché! All I can remember when thinking back is the green emerald colour that dominates the landscape. The lush and luxurious jungle which characterises the rainforest is replaced by banana, tea and coffee plantations around the villages making the long drives exciting and varied. I was amazed to find out that Bwindi impenetrable forest features more than 1,000 flowering plant species and almost 200 different types of trees, many of which are endemic. It is no wonder that this precious ecosystem is home to an incredible variety of birds, butterflies and mammal species including some of the rarest animals on the planet.

Off the beaten track feel

It’s becoming increasingly difficult to have the feeling of travelling to a remote area, sometimes even in Africa. The often bumpy, rough roads of Uganda and the less developed infrastructure compared to some of the neighbouring countries, made my experience in Uganda truly edgy and fun. Uganda is an African success story and whilst being adventurous and unspoilt, it is now a very safe country to travel to.

Primates are so amazing that we often forget about some of the other incredible wildlife that lives in Uganda. However, I was thrilled to see herds of water buffalo in Queen Elizabeth National Park and watch hippos and elephants playing in the water of the Kazinga Channel. I took hundreds of photos of colourful birds, lazy crocodiles and elegant antelopes. If you are luckier than I was, you could even spot the famous tree climbing lions in Ishasha and if you are outrageously lucky the even more elusive leopard!

Primate treks are of course a big highlight but there’s more to Uganda than this. Kayaking in Bunyonyi, a gentle trek on the slopes of the Rwenzori Mountains, or a walking safari in Lake Mburo are only some of the options. I loved the gentle trek to the waterfalls in Bwindi; spellbound, I watched hundreds of colourful butterflies on the paths and listened to the multitude of birds singing in the forest as if it was the most beautiful concert I had ever heard. 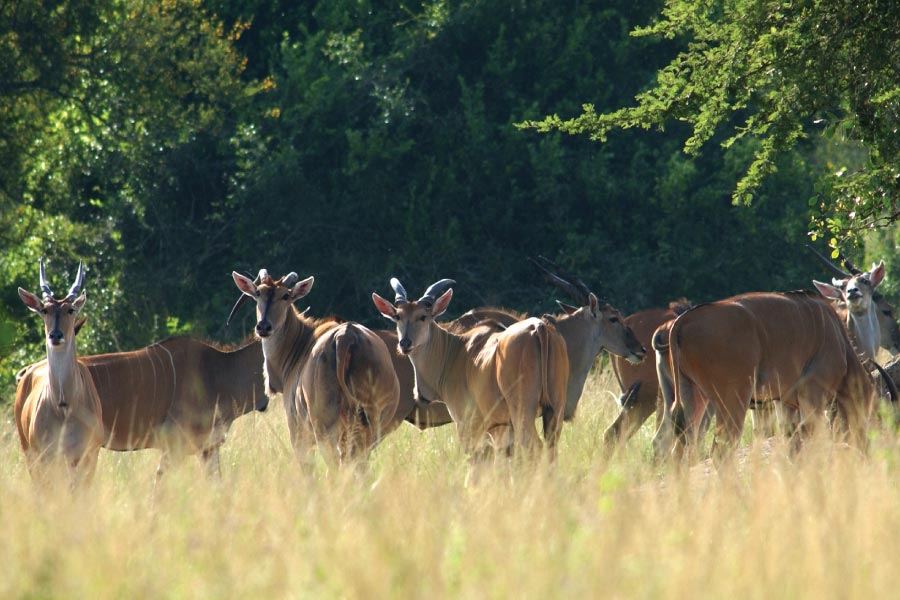 Lakes, waterfalls, channels; the water element is prevalent in the Ugandan landscape which even features the source of the mighty Nile. Apart from allowing the lush vegetation to survive, this precious element adds to the beauty of the scenery, makes the activities on offer varied and exciting and is the habitat for many species that otherwise wouldn’t be able to survive. 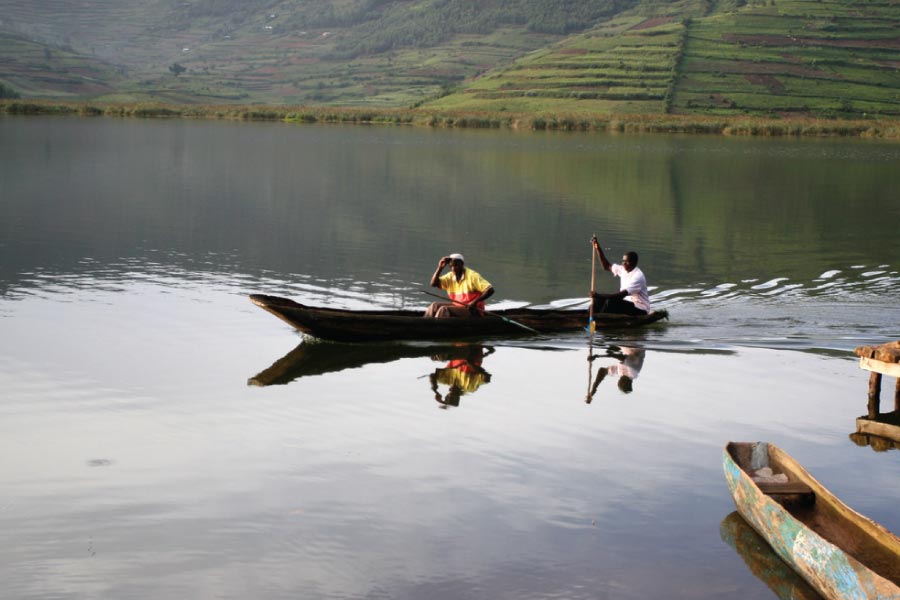 Gorillas are endangered creatures and the only way of helping them to survive is to get involved! A gorilla permit is not cheap but the experience is worth every penny. By puchasing one you will be contributing to the survival of these marvellous primates and the conservation of their rainforest home.

Uganda needs support and apart from helping the conservation of its wildlife and ecosystems, it’s vital we help the local communities to improve their standard of life. Bwindi Hospital is an important hospital in Uganda specialising in HIV treatments and is one of the projects Explore supports.

Although the gorilla trek has to be the main highlight, when it comes to outstanding moments, I thought the chimp trek was up there with the best of them. Kibale National Park has the biggest population of chimps on earth and is the best place to observe them. I was impressed with our ranger, a lovely and experienced lady who would be able to recognise any odours, sounds and tracks in the forest. 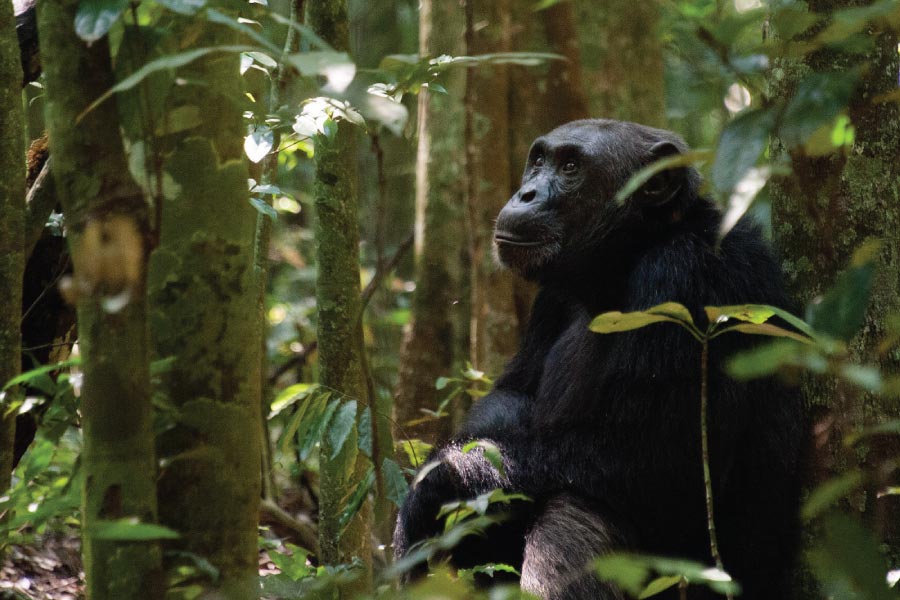 The chimp trek is a fantastic experience and is quite different from the gorilla trek as it involves being very vigilant and fast to understand where the chimps are and how to find them. As we finally heard them screaming we were absolutely thrilled when we saw them coming towards us. Only a few metres away, they didn’t seem bothered by our presence. As they slowly merged back into the forest after their brief procession, our day was made!

Wildlife enthusiasts know that a gorilla encounter is the ultimate wildlife experience. I had been waiting for this moment for a very long time. Unlike the chimps, which can be more difficult to spot, you are pretty much guaranteed an encounter with the gorillas. The anticipation and realisation that this was actually finally going to happen, kept me awake almost all night! 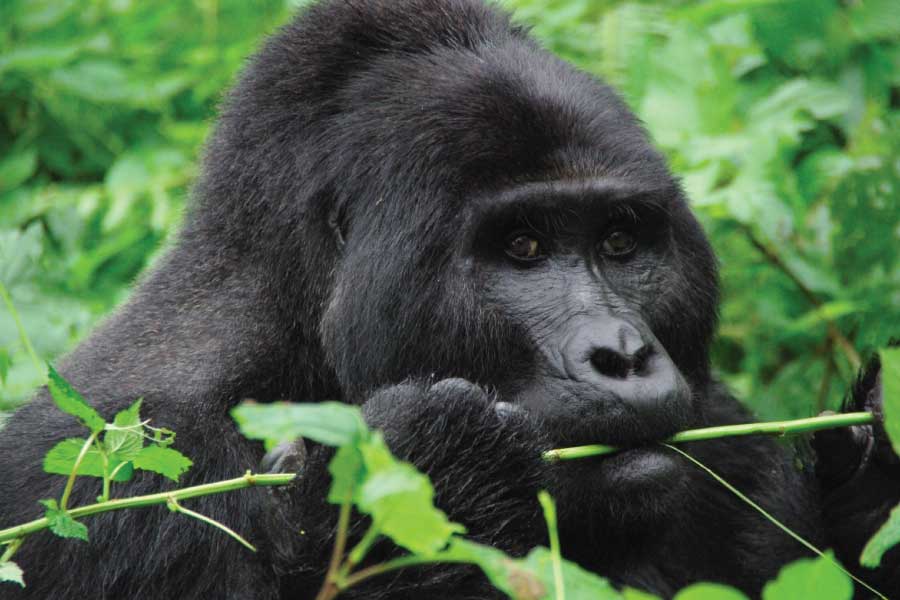 An early start was on the cards anyway and from my lovely tented camp I had been watching the tall, steep and verdant mountain the day before, waiting for the morning to come so I could climb it. After being assigned to our groups and to our experienced rangers, we started heading up, following the family of gorillas which had been the first to be habituated. As we climbed, I had a conflict between wanting the most beautiful walk of my life to last as long as possible and at the same time having the burning desire to find the gorillas as quickly as possible. We had been warned it could take as little as one hour or the whole day, depending on where the gorillas were. If possible, this increased my adrenaline even more. I could barely contain my excitement. I think the beauty about this trek was that not only were we walking through some of the most incredible habitat I have ever seen but also that we were working hard to climb the mountain in order to get the most amazing reward.

I loved every minute of it; the sounds of the nature, the lush rainforest, (appropriately called ‘impenetrable’), and the pure air. But after two hours, I was ready for the life changing encounter. And when the rangers quietly announced that yes, we had got there and we were going to find the gorillas in a few minutes, our excitement couldn’t have been greater.

A beautiful family of gorillas, moving slowly were having their breakfast in front of us. Tearing out and chewing bamboo shoots, scratching their heads, climbing trees, sometimes moving away and sometimes staying still and placid in front of us rewarding us with the most incredible poses. These furry, gentle giants whose black colour contrasts with the lush green vegetation of the forest, were just indescribable.

And while observing their features, I realised why they are so close to human beings in the evolutionary scale. Unlike other animals, their faces really looked individual. I realised that the old, tired silverback really looked like an old man and enjoyed watching the youngest addition to the family in the same way I have fun watching a young child playing and being naughty. What an incredible experience; when the rangers announced it was time to leave, I couldn’t believe one hour had already gone. I could never get bored with them. They were so entertaining and so beautiful that it felt like a mystical experience that will stay with me for a lifetime.

We also offer Tailormade Uganda Safaris – perfect if you want us to plan an itinerary to your exact specifications and budget or travel on your own itinerary in a private group. Talk to one of our experts with the number bellow.

Know The Best Destinations For Chimpanzee Trekking in Uganda

11 Things To Know About Mountain Gorilla Trekking In Uganda

This site uses Akismet to reduce spam. Learn how your comment data is processed.