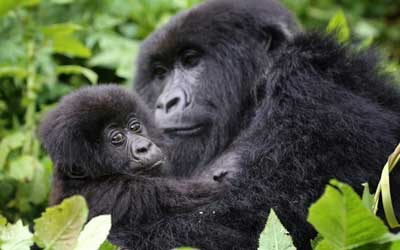 Primarily there are 2 species of Gorillas available which are further divided into 4 subspecies western lowland gorillas, the eastern lowland gorillas, the mountain gorillas, and the Cross River gorilla. Amongst all types of Gorillas Mountain gorillas is the world’s most endangered ape, which is found only in small portions of protected afro Montane forests in northwest Rwanda, southwest Uganda, and eastern DRC.

Rwanda is one of the most iconic and easiest places to meet these huge mammals who are really fun to watch. Mountain Gorillas share 98% of DNA with human hence they are considered as the closest relative of Humans. The Mountain Gorillas are easy to identify having broader chest along with a wider jaw and long black fur.

These huge mammals are quite shy however, when needed they can be very aggressive and harmful.

When in danger they roughly beat their own chest and give vicious roars.

The Rwanda Gorillas live in groups of up to 6-12.

Every group has a lead male who takes charge mostly when anyone from the group the whole group is in danger or attacked.