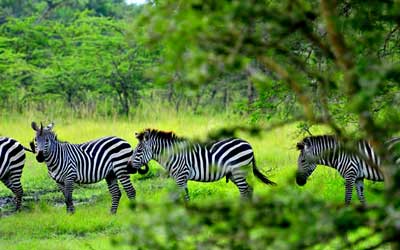 Uganda is dramatically famous for the wonderful mix of savannah and forest parks as well as being the iconic place for primates spotting. Amongst all other interesting things to see in Uganda the country’s national parks offer a rich view of many wildlife.

African Bush Elephants are the largest living Mammals which are estimated up to 13 feet tall and weigh 11.5 tons for a male elephant. One of the most significant animals of the list of “Big Five” can be spottable in Uganda.

There are 29 species of Antelopes residing in Uganda, including the Uganda kob.

Rock Python:  Rock Python is the biggest snake of Africa which is over 5 meters long often feeds on large rodents or small antelopes are spottable in Queen Elizabeth National Park.

Mountain Gorilla: Mountain Gorillas are undoubtedly the biggest primates that are the main attraction of Uganda safari. Uganda is a homeland to over half of the world’s gorilla population.

African Lion: The king of the beast and another member of Big Five is another attraction of Uganda. The lions' pride including male, female, and cubs are spottable in the protected areas of Uganda.

Cape buffalo: Cape buffalo named as the “the black death” is another member of Big Five

African Leopard:  Do you know African leopards are skilled swimmers, fastest runners, and can jump up to 10feet in the air which makes them the terror to the prey. This member of Big Five is also detected in Uganda and one of the most desired animals to be spotted in travelers list.

Hippopotamus: The third-largest terrestrial mammal after the elephant and the rhinoceros is also living in Uganda. Hippos are mostly referred to as “river horse” as they spend a lot of time in the water to cool off.

Uganda giraffe: This subspecies of Giraffes are the tallest of the giraffes reaching a height up to 19 feet.