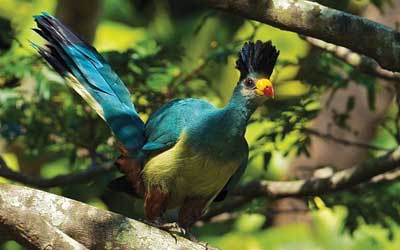 The bird got its name from the large bill that looks almost like a shoe, the bird looks quite old and weirdest.

The most colorful bird that is quite slim and shy natured can be mostly spotted at Albertine Rift that borders the Congo, Rwanda, and Uganda.

Widely believed by the locals that blue turaco brings good luck, is the most common bird that can be spotted in Uganda.

This tall wading bird looks much wired due to its cloak-like wings, skinny legs and air sacs hanging down from the base of its neck. This is mostly considered as the ugliest bird of Uganda.

These small and elusive birds can only be spotted at the Bwindi National Park. With green feathers and light blue throat, the bird looks quite exotic and one of the rarest bird species of Uganda.