Few reserves in the world can boast such a high biodiversity rating and with landscapes including savannah, bushland, wetlands and lush forests. Covering 1978 sq km, scenic Queen Elizabeth National Park is one of the most popular parks in Uganda.

The park is inhabited by 96 species of mammals, including healthy numbers of hippos, elephants, lions and leopards as well as chimps and hyenas. The remote Ishasha sector, in the far south of the park, is famous for its tree-climbing lions; these females, who enjoy spending the long, hot afternoons snoozing photogenically in fig trees, are the most memorable sight in the entire park, but don’t miss the superb birdlife or the wonderful boat trip on the Kazinga Channel either.

Meet and greet at Entebbe International Airport, then you will be transferred to your respective hotel(Forest Cottages) for bed and breakfast basis (BF)

Wake up early morning, have your breakfast head to Mbarara town through volcanic formation of the western Rift Valley towards Queen Elizabeth National Park.

The descent reveals a stunning panorama of Lakes George and Edward amid-st game-filled plains, have a stop over at the Equator for photography proceed to Queen Elizabeth National Park, have lunch en-route by 2 pm go for the unique boat cruise that takes 2hrs on the Kazinga channel and onto Lake Edward.

The trip passes through possibly the highest hippo concentration in Africa and many mammals may be seen drinking water. 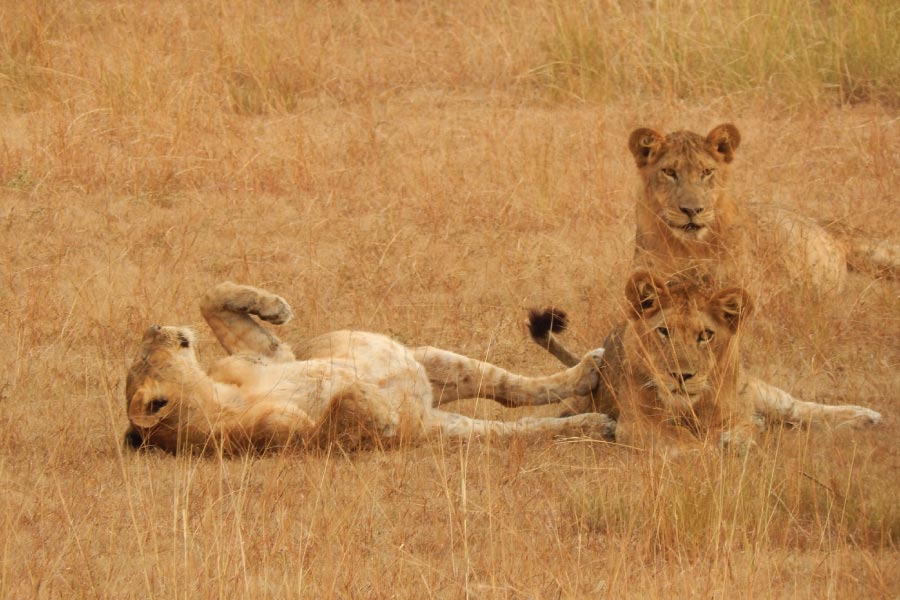 The cruise offers the excellent platform for photography and game viewing.
The bird life is colorful and abundant.

Wake-up early morning have breakfast, then go for the game drives where you will see so many animals like Lions, Leopards, giant forest hog, Buffalo, Elephants, Diffasa, Water buck, Topi, Uganda Kobs are so many and bush bucks, it takes 3/4 hours later return at your hotel for lunch relax, in the evening set-off for a nature walks overnight and dinner at Kazinga Channel View Resort/Tembo Safari Lodge

After your breakfast, early in the morning head to Kalinzu for chimps trekking and Imaramagambo forest, visitors can climb through tropical forest and catch a glimpse of a variety of primates, including chimpanzees

Queen Elizabeth National Park diverse eco-system of grassy plains, tropical forests, rivers, swamps, lakes and volcanic craters is a home to an incredible abundant wildlife. Then after return to lunch relax for some few hours and then .

Proceed to Mbarara where you will have your lunch en-routes after proceed to Kampala where you will pass through Lake Mburo National Park and have a chance to sight  some zebras on your way back reach Kampala and catch evening flight back home.

Are you ready to start planning for this safari or you have some more questions?

ENQUIRE ABOUT THIS SAFARI RIGHT AWAY!
ENQUIRE NOW

Somewhat off the beaten track in the far southern sector of the park, Ishasha is famous for its population of tree-climbing lions. It’s one of the few places in Africa where lions are known to hang out in trees (you’ll find them in Kidepo National Park too) and are often found lazing on the sprawling limbs of fig trees during the heat of the day.

Generally the best time to spot them is outside the usual safari drive times (11am to 5pm, basically when they’re not hunting). If it’s wet, the lions generally won’t climb.

As well as being famous for its tree-climbing lions, Ishasha, in the south of the Queen Elizabeth National Park, is the only place to see topis and sitatungas.

The Kazinga channel is a 40 kilometers long channel that connects Lake Edward and Lake George and is popular for boat rides. We will definately be taking one on this Queen Elizabeth National Park trip.

Almost every visitor takes the two-hour launch trip up the Kazinga Channel to see the thousands of hippos and pink-backed pelicans, plus plenty of crocodiles, buffaloes and fish eagles. With a little luck, it’s also possible to catch sight of one of the elephant herds and – very occasionally – see a lion or a leopard. The boat docks below Mweya Safari Lodge, but you buy tickets at the Mweya Visitor Information Centre on top of the hill. Trips departs at 9am, 11am, 3pm and 5pm.

Boat rides along the Kazinga channel are also great for bird watchers because of the vast species of birds.

Most wildlife-viewing traffic is in the northeast of the park in Kasenyi, which offers the best chance to see lions, elephants, waterbucks and kobs. It’s also one of the most scenic sections of Queen Elizabeth National park in Uganda, particularly in the morning when the savannah landscape shines golden and is dotted with cactus-like candelabra trees. Night game drives (with a guide) are also available, though you may have to hire a spotlight (US$20) to see anything. We can pay for drives or book guides when you arrange for it on this safari.

There’s also a small network of trails between Mweya Peninsula and Katunguru gate that usually reveal waterbucks and kobs, elephants and, occasionally, leopards.

You can get just about everywhere by car if it isn’t raining, though having a 4WD is a good idea in Ishasha year-round.

In the eastern region of Queen Elizabeth national park, in the 100m-deep Kyambura (Chambura) Gorge, you can go chimpanzee tracking (chimp permit per person US$50), with walks lasting from two to four hours and departing at 8am and 2pm. You have a semi-reasonable chance of finding the habituated troop, but visits are often unfruitful; mornings are probably the best bet. The gorge is a beautiful scar of green cutting through the savannah, and from the viewing platform you can sometimes see primates, including chimps, frolicking in the treetops below. Children under 15 years aren’t permitted.

Guided nature walks through the forest in Maramagambo are available. Trips on the forest trails here are taken mostly by birdwatchers, though there are nine species of primate around and it’s quite common to see pythons hunting and eating bats. Down at Ishasha, hippo encounters are pretty likely on short walks along the river and, if you’re there early in the morning, there’s a chance of spotting a giant forest hog. You won’t see much on a walk at Mweya that you can’t see just hanging around on your own.

Crater Lakes in Queen Elizabeth National Park are a major tourist attraction and these include Lake Katwe which is known for salt mining. Tourists to Lake Katwe often meet salt miners who are both men and women each with an individual mining area.

A few kilometers from Lake Katwe is Lake Munyanyage which is another crater lake and this one is home to large numbers of flamingos and other bird species.

Take photos at the Equator line

The Uganda Equator is where the northern hemisphere meets the southern hemisphere and is a great place for taking photos. There are also craft shops from where tourists love to buy souvenirs.

The Mweya Peninsular has got great accommodation facilities and is great for sightseeing, with great views of the park. Visiting with a guide is the best way to explore this as the guide will give you all the information you need as you go. The Mweya Information Center also provides all the necessary information about the park as well as the Mweya Peninsular.

Queen Elizabeth National Park has a good variety of lodging to suit all budgets, both inside the park and on its periphery. The best place to stay is a lodge or campsite inside the park – this gives the best chance to see wild animals, as dawn and dusk are both fruitful times for a safari.

Mweya Peninsula: There’s a good variety of places to stay on the Mweya Peninsula, including two smart luxury camps. A lot of wildlife roams through here, so you genuinely need to be careful at night, especially if you’re walking to/from the Mweya campsite. There’s good access to early-morning safaris here too.

Kyambura: There is a UWA campsite in Kyambura for campers wanting to stay this side of the park. There are also several lodges here, and just beyond the park boundaries.

Kichwamba Escapment: This ridgetop spot along the Kasese–Mbarara highway, outside the park’s eastern boundary, has some of the best views in Uganda. It looks over the Maramagambo Forest and a wide sweep of savannah out to Lake Edward and the Rwenzori Mountains. It’s a 15-minute drive to chimp tracking at Kyambura (Chambura) Gorge and 45 minutes to wildlife drives at Kasenyi. There are plenty of small-scale coffee plantations in the area.

Ishasha: In the extreme south of Queen Elizabeth National Park, Ishasha sees far fewer visitors. But with growing lodging options, and good ones at that, it’s worth considering staying in this part of the park. You may not see elephants but there are Ishasha’s famous tree-climbing lions and a range of other wildlife.

Kihihi: For affordable or last-minute accommodation travelling between Bwindi and Queen Elizabeth, you can stay in the town of Kihihi, 16km from Ishasha gate. If you have a gorilla permit for Buhoma, 40km south in Bwindi, Kihihi is within reach. On the downside, you’ll miss out on the whole wildlife experience of overnighting in the parks. There’s a Stanbic Bank with ATM.

Kasenyi: In a bare part of the park, a few new lodges have sprung up near the salt lake Lake Bunyampaka. Though a bit desolate, it is perfect for those wanting to hear wild animals at night. The location inside the gate also offers a jump on early-morning safaris.

Katunguru & Kazinga Channel: Next to the bridge, Katunguru is a scruffy crossroads of commerce and transit devoid of appeal. In contrast, nearby Kazinga Channel south of the river has lodgings tucked into a quiet patch of bush with great riverbank views.

Are you ready to start planning for this safari or you have some more questions?

BOOK OR ENQUIRE ABOUT THIS SAFARI NOW!