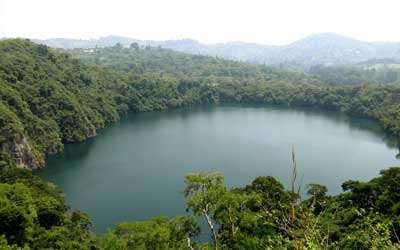 Uganda has an assortment of Lakes and rivers which have covered almost a third of the country and that is the reason Uganda has been called a land of lakes.18% of the estimated land of Uganda is covered by water which is around 236,040 km2 of the land surface.

Lake Victoria: Victoria is the largest lake of Africa as well as the second largest freshwater lake in the world covering up 68,800 sq km of area and 1100m above sea level.

The lake is shared by both Uganda and Kenya. The attraction of this lake is the cruise and fishing activities.

Lakes Edward and George: Acquiring 2325 sq km Edward is one of the deepest lakes which have 913m of depth. Lake George is relatively smaller acquiring 250sq km, which is shallow and lined by the swamp.

Lake Albert: The Lake is about 612m deep and shared between Uganda and Congo. This beautiful lake is surrounded by the fishing community.

Lake Kyoga: Lake Kyoga is a large and shallow lake having maximum depths of 4 and 5.7 meters covering up an area of about 1,720 km2. Extensive wetlands fed by a complex system of rivers can be spotted around the lake.