From far, the eyes cannot fail to catch the sight of a whitish pinnacle towering the normally blue sky. As one approaches, one is gripped by that special feel of a godly environment, with a heroic atmosphere of the Martyrs given by the imposing giant structure of a shrine. This is Namugongo where now people flock daily in Tens and thousands to honour and pray to God through the intercession of the twenty two Uganda Martyrs.

This Uganda Martyrs Minor Basilica/Shrine is a Catholic church dedicated to the Martyrs of Uganda who shed their blood because of the Christian faith. The Shrine is well known for its beautiful and unique interior and exterior, but it is especially notable for its shape and architectural plan: the 22 copper pillars-over 100 feet long that support the shrine built in form of an African hut and its wooden doors that depict the history of the Martyrs. The Shrine has a capacity 1000 seats arranged in a circular form.

The construction of the Uganda Martyrs’ Shrine began in 1967. It was completed and formally opened by the special Papal envoy, His Eminence Sergio Cardinal Pignedoli on 3rd June 1975. Thanks to the late former Archbishop Emmanuel Cardinal Nsubuga the author of the project, Dr. Danhinden the Architect and the ROKO Construction for the wonderful work done. When Pope John Paul II made a Pilgrimage to Namugongo on February 7, 1993, during his six -day visit to Uganda (5th -10th February 1993), he elevated the Shrine to a rank of a minor Basilica.

There are also Anglican martyrs that were killed by King Mwanga between 1885 and 1887 together with the Catholic martyrs. While paying tribute to the 22 Catholic martyrs  Pope Paul IV also paid tribute to the Anglican martyrs in his homily at the canonisation. “And we do not wish to forget”, he said ,”the others who, belonging to the Anglican confession, met death for the name of Christ.”

All these martyrs are honoured on 3rd June every year and that is the best time to visit.

Many of the martyrs were pages in the Kabaka’s palace while others were working in chiefs’ homesteads. Each family was selecting very hardworking boys, well behaved too, to go and work for the King. It was also a sign of showing loyalty to the King as it was prestigious to work for the King.

It is in the King’s palace and chiefs homes, therefore, that the Martyrs began to learn religion after the coming of the Anglican and catholic Missionaries in 1877 and 1879 respectively. The Christian Missionaries were invited by Kabaka Muteesa I, Mwanga’s father, in his letter dated 14th April 1875 that was published in the Daily Telegraph of 15th November 1875 in England.

The first martyr to die was King’s major domo and leader of all Christians, Joseph Mukasa Balikuddembe, on 15th November 1885. He was killed because he had pleaded to King Mwanga to abandon the vice of homosexuality and not to kill Bishop Hannington, an Anglican missionary who had entered Buganda from Busoga (the backdoor of Buganda kingdom).

From that time he became angry with all Christians as they all refused to give in to his sinful demands and were persuading all other pages to do the same. On 25th May, 1886, King Mwanga ordered for a number of Christians to be brought before him and he passed on them the death penalty. 20 of the 22 martyrs were killed between 26th May 1886 and 3rd June 1886.

Some Martyrs were hacked to pieces like Andrew Kaggwa, Pontian Ngondwe, Matthias Mulumba  and Denis Ssebuggwawo. Others were speared to death like Gonzaga Gonza, while others like Charles Lwanga and 12 others were burnt alive at Namugongo.

John Maria Muzeeyi was the last of the 22 martyrs to be killed on 27/01/1887. He was beheaded and his body was thrown into a swamp.

The twenty-two Roman Catholics martyrs are:

These two martyrs, Daudi Okello and Jildo Irwa, were young catechists from Paimol, Gulu at the beginning of the 20th century. Having just received Baptism and Confirmation, they realized that to be a Christian means to share one’s faith, even at the cost of life itself, should this become necessary. So they started at once to work as catechist, and carried on until they shed their blood.

People who opposed the new religion took advantage of socio-political unrest to stop the preaching of the Gospel in Paimol. The two catechists were hounded, threatened, ordered to give up their activities, and finally speared to death. It was the week end of 18th – 20th October 1918.

Daudi and Jildo were beatified by Pope John Paul II on 20th October 2002.

Lying 15 Kilometres east of Kampala off Jinja Road, Namugongo was formerly a place of execution of all people who committed grave offences in the Kingdom of Buganda. It is here that 14 of the 22 Uganda Martyrs offered their life to Christ (burnt alive), on the orders of king Mwanga in 1886, having refused to denounce their Christian faith. Following the Holocaust of these Martyrs which reached a climax on 3rd June, 1886 Namugongo has steadily taken on the image of attraction as a place of pilgrimage, as God simultaneously has honoured them before Believers. 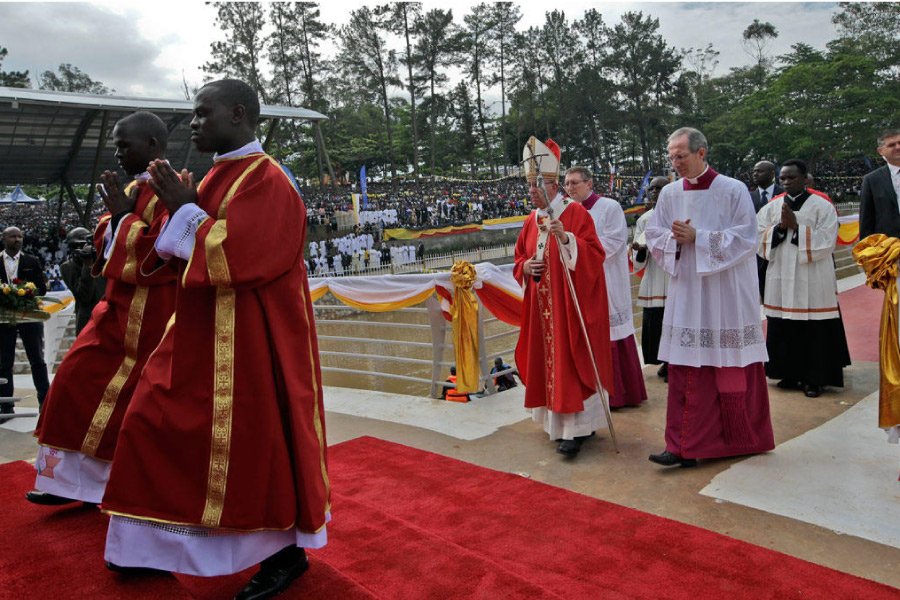 Pope Francis, center, walks with the pastoral staff as he celebrates a mass near the Catholic martyrs’ shrine of Namugongo, Kampala, Uganda, Saturday, Nov. 28, 2015. Pope Francis is in Africa for a six-day visit that is taking him to Kenya, Uganda and the Central African Republic.

On 6th June 1920 Pope Benedict XV beatified the Uganda Martyrs. Pope Paul VI canonized them on Mission Sunday, 8th October, 1964 in Saint Peter’s Basilica, Rome. The same Pope honoured the Martyrs with a pilgrimage on 31st July to 2nd August 1969 – the first visit ever by a pope to the African Continent.

In 1935, 49 years after the holocaust, the Mill Hill Missionaries founded a Catholic Parish at Namugongo. They dedicated it to Our Lady Queen of the Martyrs.

The big imposing Shrine dominating Namugongo today stands exactly on the spot where the small original Parish Church stood and it is the same spot where Charles Lwanga was burnt alive. 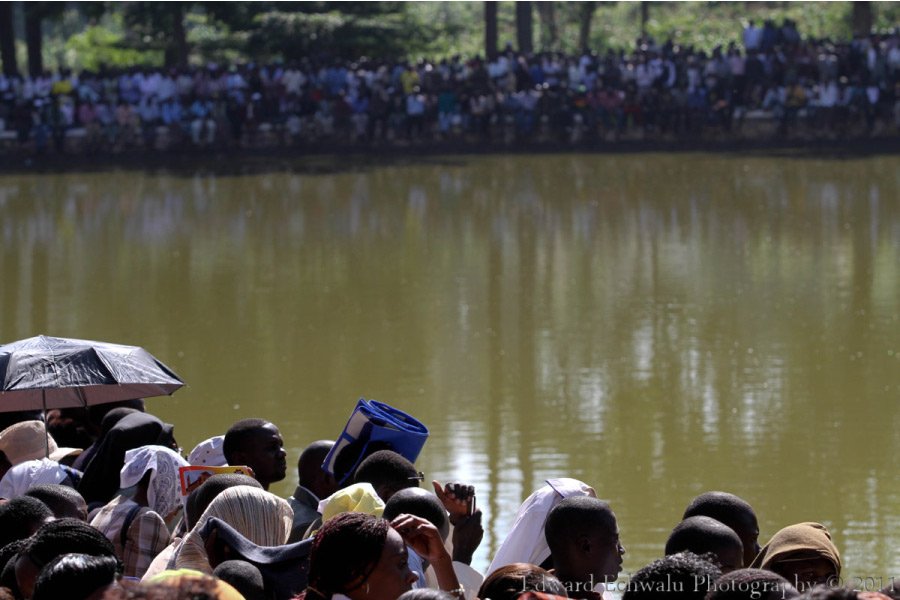 Pilgrims Gather Around the Lake For Blessings

Remembering the work executed by St. Charles Lwanga when still a page in King Mwanga’s palace, when he spearheaded the excavation of the legendary Kabaka’s lake at Mengo, a Martyrs’ Lake was excavated at Namugongo. Many Pilgrims have often drawn water from this Lake and later given testimonies about this water healing them of various diseases.

The Pavilion (Island) in the lake is another unique feature at Namugongo with a clear view that can be seen from all angles of the over 15 acres Shrine compound. It is inside this pavilion where the main celebrant sits on big occasions like Martyrs’ day, June 3. This grass thatched pavilion, also in circular form like the Shrine is supported by 4 pillars and can accommodate more than 300 Priests and a number of Bishops that turn for the High Mass on Martyrs Day.