The Serengeti National Park is a Tanzanian national park in the Serengeti ecosystem in the Mara and Simiyu regions. It is famous for its annual migration of over 1.5 million white bearded (or brindled) wildebeest and 250,000 zebra and for its numerous Nile crocodile.

The Maasai people had been grazing their livestock in the open plains of eastern Mara Region, which they named “endless plains”, for around 200 years when the first European explorer, German Oscar Baumann, visited the area in 1892. The name “Serengeti” is an approximation of the word used by the Maasai to describe the area, siringet, which means “the place where the land runs on forever.

The first Briton to enter the Serengeti, Stewart Edward White, recorded his explorations in the northern Serengeti in 1913. Stewart returned to the Serengeti in the 1920s and camped in the area around Seronera for three months. During this time, he and his companions shot 50 lions.

Because the hunting of lions made them scarce, the British colonial administration made a partial game reserve of 800 acres (3.2 km2) in the area in 1921 and a full one in 1929. These actions were the basis for Serengeti National Park, which was established in 1951.

The Serengeti gained more fame after the initial work of Bernhard Grzimek and his son Michael in the 1950s. Together, they produced the book and film Serengeti Shall Not Die, widely recognized as one of the most important early pieces of nature conservation documentary.

To preserve wildlife, the British evicted the resident Maasai from the park in 1959 and moved them to the Ngorongoro Conservation Area. There is still considerable controversy surrounding this move, with claims made of coercion and deceit on the part of the colonial authorities. 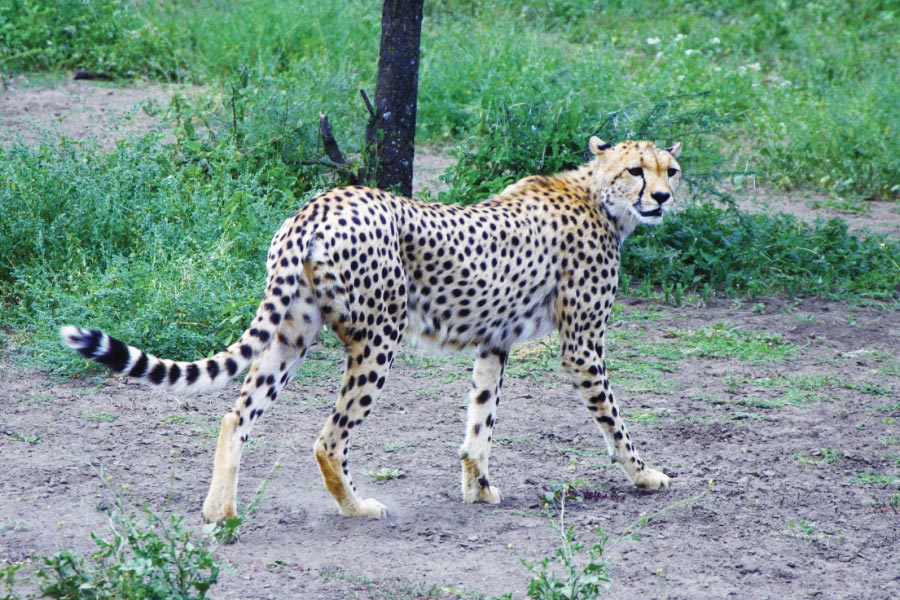 The park covers 14,750 km2 (5,700 sq mi) of grassland plains and savanna as well as riverine forest and woodlands. The park lies in the north of Tanzania, bordered to the north by the Kenyan border, where it is continuous with the Maasai Mara National Reserve. To the southeast of the park is the Ngorongoro Conservation Area, to the southwest lies Maswa Game Reserve, to the west are the Ikorongo and Grumeti Game Reserves, and to the northeast lies the Loliondo Game Control Area. Together, these areas form the larger Serengeti ecosystem.

The park is usually described as divided into three regions-

Serengeti plains: the endless, almost treeless grassland of the south is the most emblematic scenery of the park. This is where the wildebeest breed, as they remain in the plains from December to May. Other hoofed animals – zebra, gazelle, impala, hartebeest, topi, buffalo, waterbuck – also occur in huge numbers during the wet season. “Kopjes” are granite florations that are very common in the region, and they are great observation posts for predators, as well as a refuge for hyrax and pythons.

Western corridor: the “black cotton” (actually black clay) soil covers the swampy savannah of this region. The Grumeti River is home to enormous Nile crocodiles, colobus monkey, and the martial eagle. The migration passes through from May to July.

Northern Serengeti: the landscape is dominated by open woodlands (predominantly Commiphora) and hills, ranging from Seronera in the south, to the Mara river in the border with Kenya. Apart from the migratory wildebeest and zebra (which occur from July to August, and in November), the bushy savannah is the best place to find elephant, giraffe, and dik dik.

Human habitation is forbidden in the park with the exception of staff for the Tanzania National Parks Authority, researchers and staff of Frankfurt Zoological Society, and staff of the various lodges, campsites and hotels. The main settlement is Seronera, which houses the majority of research staff and the park’s main headquarters, including its primary airstrip. 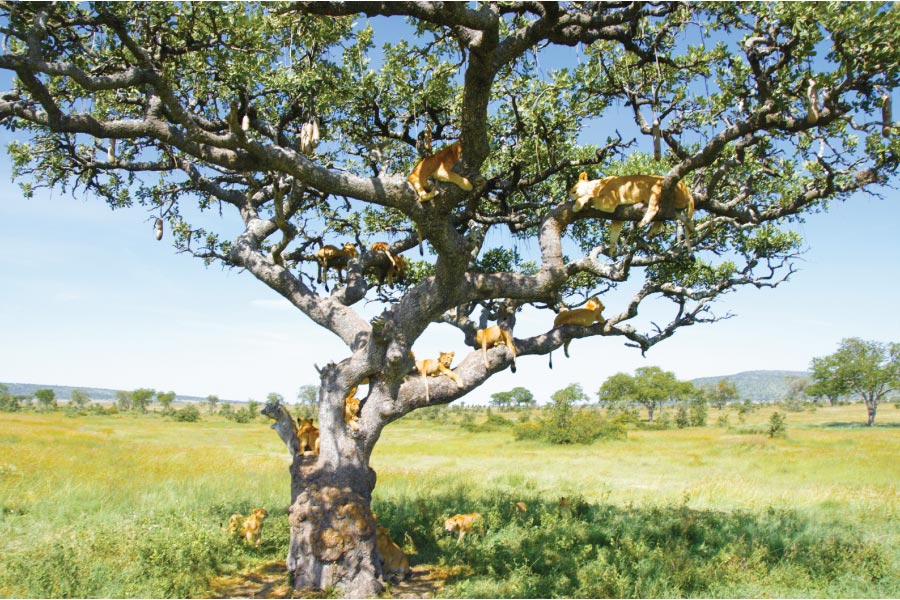 A herd of elephants in the morning in Serengeti National Park

As well as the migration of ungulates, the park is well known for its healthy stock of other resident wildlife, particularly the “big five”, named for the five most prized trophies taken by hunters:

Lion: the Serengeti is believed to hold the largest population of lions in Africa due in part to the abundance of prey species. More than 3,000 lions live in this ecosystem.

African Leopard: these reclusive predators are commonly seen in the Seronera region but are present throughout the national park with the population at around 1,000.

African Elephant: the herds are recovering from population lows in the 1980s caused by poaching and are largely located in the northern regions of the park.

Black Rhinoceros: mainly found around the kopjes in the centre of the park, very few individuals remain due to rampant poaching. Individuals from the Masai Mara Reserve cross the park border and enter Serengeti from the northern section at times.

Because of its biodiversity and ecological significance, the park has been listed by the United Nations Educational, Scientific and Cultural Organization as a World Heritage Site. As a national park, it is designated as a Category II protected area under the system developed by the International Union for Conservation of Nature, which means that it should be managed, through either a legal instrument or another effective means, to protect the ecosystem or ecological processes as a whole

The administrative body for all parks in Tanzania is the Tanzania National Parks Authority. Myles Turner was one of the park’s first game wardens and is credited with bringing its rampant poaching under control His autobiography, My Serengeti Years:

“Snapshot Serengeti” is a science project by the University of Minnesota Lion Project, which seeks to classify over 30 species of animals within the park using 225 camera traps to better understand how they interact with each other and lions

Proposed road across the northern Serengeti

In July 2010, President Jakaya Kikwete renewed his support for an upgraded road through the northern portion of the park to link Mto wa Mbu, southeast of Ngorongoro Crater, and Musoma on Lake Victoria. While he said that the road would lead to much-needed development in poor communities, others, including conservation groups and foreign governments like Kenya, argued that the road could irreparably damage the Great Migration and the park’s ecosystem. The Africa Network for Animal Welfare and other groups and individuals are suing the Tanzanian government at the East African Court of Justice in Arusha to prevent the road project. The trial of Africa Network for Animal Welfare (ANAW) vs. The Honorable Attorney General of The United Republic of Tanzania was scheduled to begin 23 January 2013

The Commander in Chief has proposed expanding the Serengeti National Park to reach Lake Victoria. This would make it bigger. Some of the animals are thirsty and have no access to pure water or clean air. Lake Victoria had by the turn of the 20th century over 500 species of fish most of which were endemic to the lake. The 1960 introduction of Nile perch (Lates niloticus) set in motion the extinction of over 300 cichlid species. There are at least 600 species of algae in the aquatic ecosystems. About 31 species of frogs and toads were recorded from the basin in early 2000 and about 28 species of reptiles. Out of 235 freshwater bird species recorded in British East Africa, 170 (72%) are associated with the Lake Victoria aquatic systems and 88 of these are water birds. The birds use aquatic systems as their habitat and a source of food. Birds prefer muddy and forested habitats, used mainly for their feeding and refuge. About 44 species of mammals were recorded in the wetlands