Tsavo East – the sight of dust-red elephant wallowing, rolling and spraying each other with the midnight blue waters of palm-shaded Galana River is one of the most evocative images in Africa. This, along with the 300 kilomtere long Yatta Plateau, the longest lava flow in the world, make for an adventure unlike any other in the Tsavo East. The park forms the largest protected area in Kenya and is home to most of the larger mammals, vast herds of dust –red elephant, Rhino, buffalo, lion, leopard, pods of hippo, crocodile, waterbucks, lesser Kudu, gerenuk and the prolific bird life features 500 recorded species.

Tsavo West – From the sight of fifty million gallons of crystal clear water gushing out of from the under parched lava rock that is the Mzima Springs  to the Shetani  lava flows, Tsavo West is a beautiful, rugged wilderness. The savannah ecosystem comprises of open grasslands, scrublands, and Acacia woodlands, belts of riverine vegetation and rocky ridges including the Poacher’s Lookout where visitors can see the teeming herds in the plains below. Tsavo West offers some of the most magnificent game viewing in the world and attractions include elephant, rhino, Hippos, lions, cheetah, leopards, Buffalos, diverse plant and bird species including the threatened corncrake and near threatened Basra Reed Warbler.

The twin National Parks of East and West together form one of Africa’s largest Wilderness Reserves. This single National Park is larger than the Island of Jamaica. Tsavo as a whole consists of 10 million acres of pure Wilderness, Incorporating Savannah, Ranges and Hills, Acacia and Montane Forest, and an extensive River system. The vast plains of Tsavo are crossed by the main Nairobi-Mombasa Railroad. This historic Railway was, in 1899, the scene of one of Africa’s greatest Adventure stories. 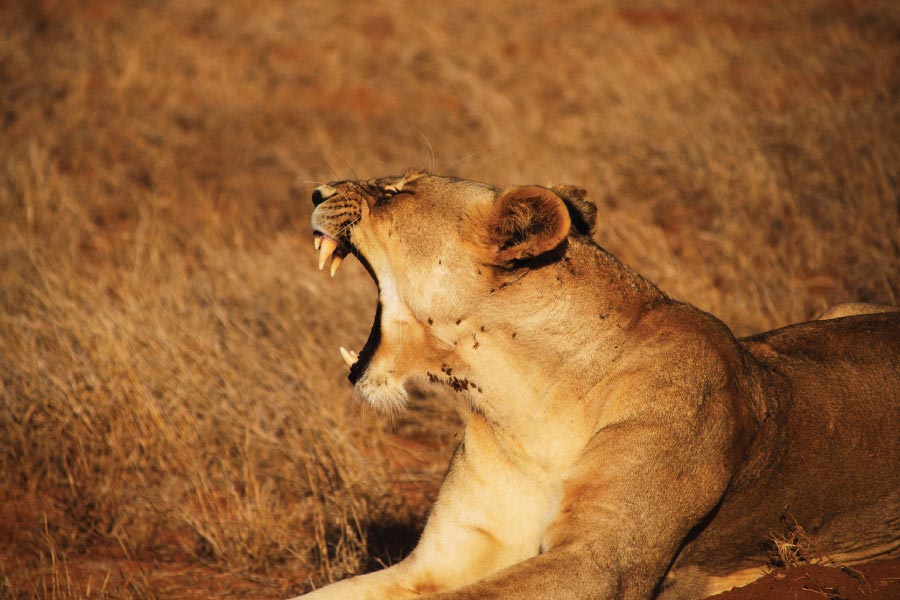 Two large lions actively preyed on the railway workers as they built a bridge over the Tsavo River, claiming over 120 victims. They evaded hunters for well over a year, and the legend of the Man-eaters of Tsavo was born. The sheer scale of Tsavo gives the visitor a chance to really get away from it all, and to explore the wild in total solitude.  On safari here you will see large herds of Elephant, their hides often a luminous red with dust, as well as Lion, Buffalo, Eland, Giraffe Impala, Kudu and possibly Rhinoceros.

Tsavo is a birdwatcher’s paradise with numerous Species of Weavers, Hornbills, Sunbirds, Rollers, and Raptors commonly seen. One of Tsavo’s most interesting geographical features is the Lugard Falls, where white water rages through a series of spectacular rock formations.

Also not to be missed is the Volcanic Mzima Springs. These Natural springs produce 50 million gallons of fresh sparkling water daily. These waters are alive with Shoals of Barbel and Hippopotamus and Waterfowl. A unique underwater observatory has been built that gives you an incredible view of this crystal clear underwater world, where massive hippos glide silently through Swirling Shoals of Barbel.

These springs have created a sprawling wetland paradise of giant Raphia palms and oases alive with water birds. Both Tsavo East and West are ideal for those who enjoy solitude and a chance to explore wilderness without encountering other people. Lodges and Camps tend to be remote and accessible by long drives or air transfer. Of the two Parks, Tsavo East is the more remote and less visited. Many of these can organize game walks and other activities.

The relative proximity of Tsavo East to the coast makes it an ideal safari destination for those staying on the coast, or wishing to combine a safari and beach holiday. Many coast based visitors combine a safari to Tsavo with visits to the Shimba Hills and Taita Game Sanctuaries, Amboseli National Park, or the Chyulu Hills.

The bird life is as varied as the landscape, from the conspicuous flocks of Golden-breasted Starlings around most of the Park to the dull, skulking Evergreen Forest Warbler in the Chyulu hills. Tsavo is home to both Species of Kenyan Ostrich with the Common Ostrich present in Tsavo West and the Somali Ostrich in Tsavo East. Hartlaub’s Bustard is found in both parts of the NP.

Tsavo lies on one of the main migration routes for Northern Hemisphere Birds. Each year from September to November the Ngulia Region becomes the base for a large-scale netting and ringing exercise. This provides important information on the migratory routes and the habits of many common Northern Species. This position on the migration route makes Tsavo a good place to spot some of the rarer migrant Falcons, with Eleonora’s Falcon and the Sooty Falcon both being on the bird list for the region (they’re most commonly seen in October and November although they may also be seen from March to May).

Tsavo West, or at least the Southern part of the Park, is also fairly close to the Taita Hills. The Taitas are home to the Taita Thrush, an endangered Species endemic to Kenya, and the Taita White-eye both of which are found only in that part of Kenya. Right down in the South-West corner of Tsavo on the border with Tanzania is Lake Jipe where some of Kenya’s less common water birds, such as the African Water Rail, Purple Swamphen and Lesser Jacana can be seen