Malindi, Located on the East Coast of Kenya, is a popular tourist town with scenic beauty, clean white beaches and a lot of history. It is claimed to be oldest marine park in Africa.

From swimming with zebra fish to windsurfing, this beautiful slice of Kenya’s Indian Ocean coastline is provides the perfect getaway. The park is endowed with magnificent resources such as fringing reefs, coral gardens in the lagoons, sea grass beds, mangroves, mudflats, marine mammals, turtles and various species of shorebirds. Visitors can also enjoy glass bottom boat rides, snorkelling, camping and beach walks in this veritable paradise.

The Landscape in Malindi is predominantly plain, the climate is generally hot and humid throughout the year. The daily temperature is around 22º Celsius minimum and 30, 5º Celsius maximum. There are short rains from October to November and long rains from April to July. The small Town of Malindi is at the centre of a strip of idyllic Tropical Beaches offering the visitor a range of world class Resorts and quiet relaxing hideaways. Malindi is where Ernest Hemingway came in the 1930s in search of Sarlin, sailfish and Wahoo. There are excellent and relatively inexpensive facilities for fishing. There are an international bill fish contest during January and an annual Sea Festival with fishing competitions between October and November. 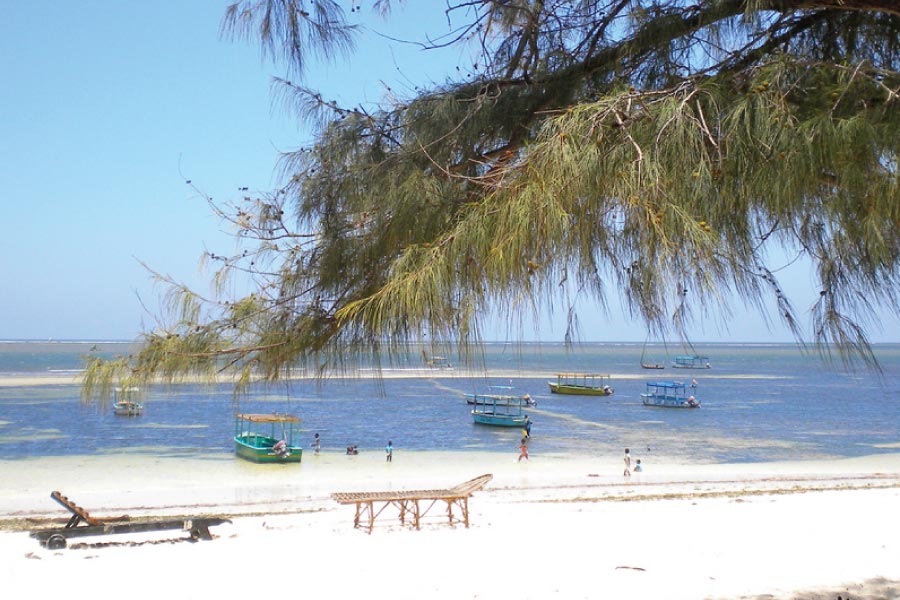 The renowned Malindi Marine National Park is a protected coastal area south of Malindi. Malindi Marine National Park has fine White-Sandy Beaches, Emerald Water and Colorful Fish (All fishing within the Park is forbidden). You can see Technicolor Fish of impossible shapes and various sizes such as Flute Mouths, Half Beaks, Hawk Fishes, Lizard Fish, Parrot-Fish, Porcupine Fish, Puffers, Thorn Heads, Trigger Fishes, Zebra Fish and hundreds of others. There are also fascinating Coral Reefs that allow for Diving and Snorkeling opportunities.

On the Northwest of Malindi, near Marafa Depression exists an Eroded Wasteland of Sandstone Cliffs and Precipices, locally known as Nyari or Hell’s Kitchen, exists also a small Arabian Town called Mambrui, and beyond that a small village and harbor called Ngomeni. The entire coastline from Mambrui to Lamu has minimal development, in terms of tourism, although wonderful Beaches, Coves and Seascapes exist in plenty. The Malindi Museum is housed in the former home of an Indian trader, built in 1891. Exhibit includes early Photographs of Mombasa, Wooden grave posts of the Gohu people, information about Vasco Da Gama among other interesting information.

The gateway to the North Coast is Mombasa, although some visitors fly directly to Malindi. The Coastal highway runs north of Mombasa all the way to Kenya’s northern frontier. Driving your own car or hired car as far as Malindi is very easy.

There are regular buses and matatus along the North coast. Many hotels and resorts in this area have Mombasa shuttles or can arrange vehicle transfers. Private taxis from Mombasa will also take you to the North Coast Beaches for an agreed fare.

Regular buses and Matatus service the North Coast Highway. Services are less regular north of Malindi. Taxis can be found in any town, or at most hotels or resorts.