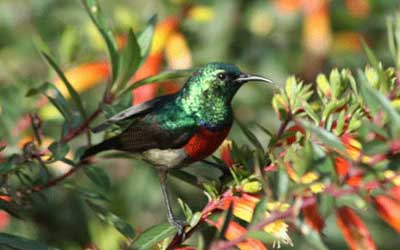 What exactly crosses your mind when you think about Rwanda, the giant gorillas, the fastest chimps, or the dense green forest? Well, there is a unique thing that attracts tourists who are not big admirers of gorillas or chimps. The country hosts 703 species of birds that make it a perfect holiday destination for the bird lovers. Here are a few iconic birds’ points of Rwanda:

Nyungwe National Park:  The Park is a tropical monotone rainforest that is home to more than 300 bird species; however 29 species are mostly spottable n the park. Red-collared Babbler is the iconic attraction of the national park and is one of the safest places to watch these beautiful birds.  The park hosts many more species of birds including Rwenzori Turaco, Handsome Francolin, Rwenzori Nightjar, Grauer’s Warbler, Regal, Blue-headed and Purple Breasted Sunbirds, Grauer’s Swamp Warbler and Neumann’s Warbler.

Lake Kivu:  The Lake Kivu isn’t only offers birding highlights, but also a stop to relax amidst the beautiful natural view. White-breasted Cormorants are commonly spotted at the lakeside, apart from these Pied Kingfishers and Osprey can be spotted at the migration time.